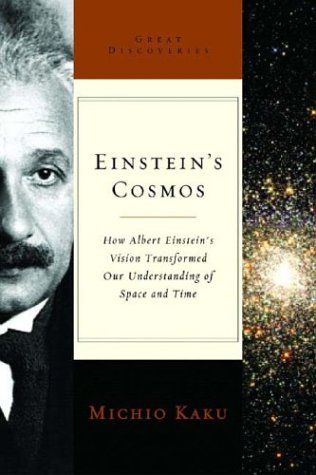 EINSTEIN'S COSMOS: How Albert Einstein's Vision Transformed Our Understanding of Space and Time

This latest entry in the Great Discoveries series (edited by Jesse Cohen and complements another, more focused study that's appearing this season, Edmund Blair Bolles's (Forecasts, Feb. 23), which takes a detailed look at Einstein's role in the development of quantum physics. Kaku, host of the nationally broadcast radio program , presents a well-sketched-out yet concise account of Einstein's life. Kaku excels, as did his subject, in drawing word pictures that illustrate in everyday language complicated subjects like the photoelectric effect, Brownian motion, and special and general relativity. The public and the press were always drawn to Einstein because he presented his theories in language that the average person could understand. Even when writing for his colleagues, as Kaku points out, he strove for simplicity of expression: his equation describing the structure of the universe is only an inch long. For a half-century after Einstein's death, the standard account was that he had frittered away the last years of his career trying to find a unified field theory, hanging on like a drowning man to the bark of determinism while the Copenhagen school sailed off in many directions by applying probabilistic methods to the inner workings of the atom. In his final chapter, Kaku shows that in fact Einstein's activities in his final years anticipated recent advances such as detecting gravitational waves, "supersymmetry" and even the attempt to reconcile science with religion. This accessible biography is recommended to readers eager, but never quite able, to understand what this relativity business is all about.