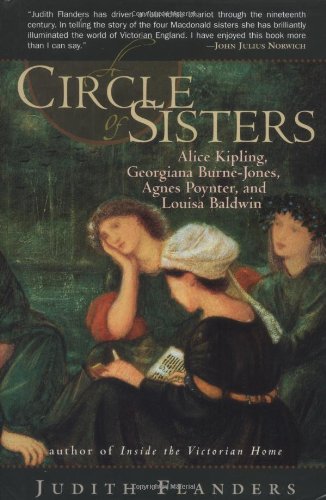 Although born to a humble Methodist minister, the clever and artistically inclined Macdonald sisters married "up," into the Victorian bourgeoisie. Georgiana married the rising pre-Raphaelite painter Edward Burne-Jones, whose affair with Greek sculptress Mary Zambaco would later test Georgiana's love for him. The family beauty, Agnes, also married an artist, the president of the Royal Academy Edward Poynter. Alice, known for her wit and flirtatiousness, married John Lockwood Kipling, the head of an art school in Bombay; Rudyard Kipling was their son. Louisa suffered from a mysterious debilitating illness, yet managed to write and publish several novels and married the industrialist Alfred Baldwin. Her son, Stanley Baldwin, was a three-time prime minister of Britain. Did the sisters "make" their husbands and their sons? Flanders ( ) ponders this question as she teases out, with novelistic insights, the domestic dramas, career paths and affinities of the sisters and their talented families. With her characteristic flair for absorbing detail and analysis, Flanders also explores more general aspects of Victorian social history: from the gender values underlying attitudes toward nervous illness to philosophies of child-rearing (particularly pertinent when discussing Rudyard Kipling's notoriously unhappy childhood). Shortlisted in England for the First Book Award, this is a treat for lovers of feminist Victorian history. 16 pages of b&w illus. not seen by .