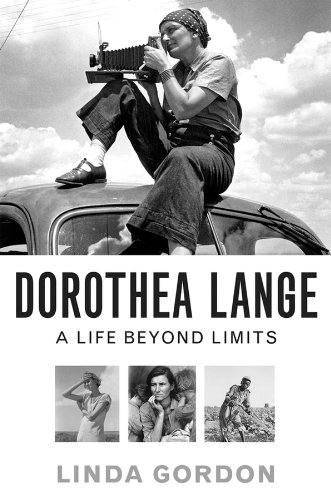 Dorothea Lange: A Life Beyond Limits

Historian Linda Gordon presents us with a portrait of the artist as a woman in her fascinating new biography of photographer Dorothea Lange [1895–1965], who captured the images of Americans on the move during the Great Depression.

Lange's most famous picture features a migrant woman in California, a refugee from the Dust Bowl. She sits by the side of the road in her lean-to tent, her children draped on her body, hanging from her haggard frame like dead weights, as she stoically looks out into the distance.

But the book's central focus is the journey made by the woman standing behind the camera lens. Lange was raised on New York City's Lower East Side and overcame obstacles almost from the start. During her childhood, her parents separated, which Dorothea experienced as a desertion by her father, and a bout of childhood polio left her with a permanent limp. She spotted an opportunity, however, in photography, which was a burgeoning new art field. Dorothea apprenticed herself to a master to learn the craft, giving herself a new identity. She dropped her childhood name, Dorothea Nutzhorn, and adopted her mother's maiden name instead.

She further redefined herself after making a westward trek in 1918. Within two years, she emerged as a prosperous society photographer in San Francisco who specialized in portraiture of the city's elite, but that work dried up in the 1930s. Lange shifted course again, becoming a documentary photographer for New Deal programs. From 1935 to 1941, Lange was virtually a migrant worker herself, traveling from place to place, photographing farm workers in fields and primitive labor camps.

Gordon wrestles with the issue of how Lange dealt with her role as a woman in a society where family burdens are disproportionately borne by females. Raising a large brood of children and stepchildren, Lange frequently had to put her own work aside to run the household. She also became the primary breadwinner for her first husband, cowboy artist Maynard Dixon, and later supported the career of her second husband, economist and diplomat Paul Taylor, despite her own failing health.

Lange privately railed at her family obligations. She shipped the children away when their care conflicted with her schedule or that of her respective husbands. And sometimes she could be cruel: she took revenge on her adolescent stepdaughter, whose father dumped her in Dorothea's lap for months at a time, criticizing and carping at her and photographing her in ways that an adolescent girl would likely have found humiliating.

Dorothea Lange's talented eye brings the Great Depression home for us even today, but an observer might suggest that Dorothea, despite her fame and talent, was as much a captive of a woman's societal roles as the migrant mother she so brilliantly photographed.

Washington Post The Woman Behind the New Deal: The Life of Frances Perkins, FDR's Secretary of Labor and His Moral Conscience