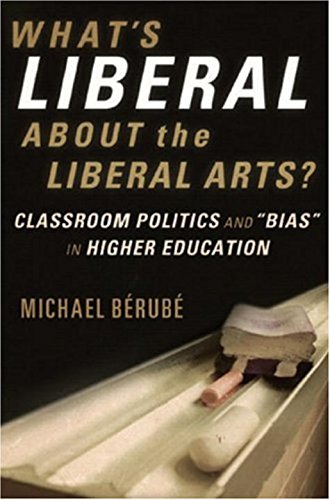 What's Liberal About the Liberal Arts? Classroom Politics and "Bias" in Higher Education

Bérubé, a Penn State literature and cultural studies professor, doesn't deny that college campuses are "teeming with liberal faculty" in this circuitous retort to what he sees as an intensification over the last five years of conservative complaints about liberal "bias" in academe. Rather, the self-described progressive postmodernist (editor of ) vies with cultural conservatives for the position of "lonely voice in the wilderness": while conservatives feel embattled in the university setting, academics, Bérubé says, are beleaguered in the country at large, where the right wing dominates all three branches of government and much of mainstream media. Universities are necessarily liberal, Bérubé asserts, as independent intellectual inquiry is fundamental to democracy. Moreover, the authoritarian right's outraged objections to "anti-American" campuses are a testament to their "disbelief that liberalism still survives." Bérubé's points about the ascendance of the right will be well taken by progressives, but the level of meandering detail he devotes to his teaching experience and his own literature curriculum may feel less relevant to nonacademic readers ( .)