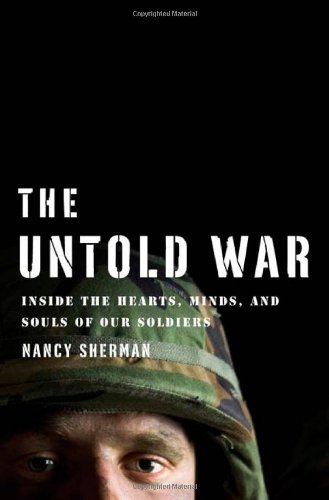 The Untold War: Inside the Hearts, Minds, and Souls of Our Soldiers

At a time when suicide rates among veterans is increasing sharply, this empathic examination of “the moral weight that soldiers carry on their shoulders” is essential reading. Sherman, a philosopher, ethicist, and psychoanalyst at Georgetown University, conducted extensive interviews with around 40 soldiers, in various stages of their careers, veterans of both the Iraq War and earlier conflicts. Through nuanced exploration of their powerful stories, Sherman makes the familiar case that soldiering becomes an identity not easily left behind when one returns to civilian life. The challenge is finding a moral self able to sustain the sensibilities of both the civilian and the warrior. That is difficult in cultures where the experiences of war and peace are divergent. The central desire and need for a soldier is to be strong. Anger, fear, revenge, guilt—these are also standard issue. How do men judge themselves, or contemplate being judged, for what they do and see? Experiencing war, Sherman says, requires compartmentalization, displacement, deferral until “soldiers find the safety and trust needed to express personal doubts and torments.” Sherman perceptively and accurately concludes that this cannot be “a private burden banned... from families and communities.” Photos.