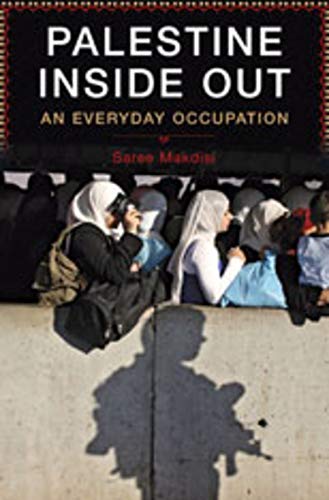 Palestine Inside Out: An Everyday Occupation

In chronicling Israel’s occupation of Palestinian territories—from road blocks to curfews, economic chaos to health care crises—UCLA professor Makdisi sketches a powerful, relentlessly heartbreaking account of a reality few Westerners know. According to Makdisi, the global media rarely covers the “routine” destruction of the occupation; rather than assessing the hermetic sealing of the Gaza Strip or the slicing up of West Bank communities for the sake of Israeli settlements, the media focuses on violence—eclipsing the “deadly effects of the Israeli apparatus of bureaucracy and control.” Makdisi unequivocally condemns attacks on civilians, Israeli or Palestinian, and acknowledges the many Israelis working toward conflict resolution (indeed, much of his data comes from Israeli human rights organizations), but his scholarship occasionally fails when surveying Israeli society: Jews who fled Arab lands don’t generally consider themselves “Arab Jews,” for instance, and Zionism is a 19th-century nationalist movement, not a reaction to the Holocaust. Yet this doesn’t detract from the urgency of Makdisi’s work. The combined weight of personal stories of abject suffering, harsh statistics (in the past seven years, Israeli military operations have killed 854 Palestinian children) and facts on the ground make Makdisi’s case that the occupation is destroying the Palestinian people, and possibly any chance for peaceful coexistence.