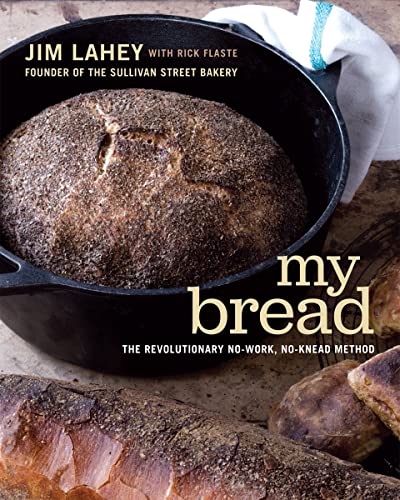 While the subtitle sounds like a late-night television infomercial, Lahey's quick bread-in-a-pot method garnered attention from foodies and critics after appearing in Mark Bittman's article. With co-writer Flaste, founding editor of the 's dining section, Lahey, founder of the Sullivan Street Bakery and the New York pizzeria Co., presents his touted no-knead bread recipe, along with a collection of recipes building on the method. With only five minutes of labor (along with 12–18 hours of waiting/rising time), the authors promise the results of artisanal Italian-inspired bread. Lahey's down-to-earth tone and straightforward technique, along with instructional photographs lead home bakers through chapters including “Specialties of the House,” with such recipes as coconut-chocolate bread and pancetta bread; “Beyond Water,” breads made with carrot or apple juices and peanut butter; and “Pizzas and Foccacias,” featuring less-than-traditional toppings such as celery root, cauliflower and fennel pizzas. Additional sections on building sandwiches and what to do with stale bread—everything from soup to dessert—round out this innovative title.