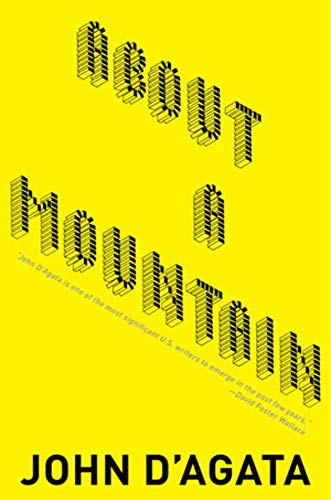 In this circuitous, stylish investigation, D'Agata ( ) uses the federal government's highly controversial (and recently rejected) proposal to entomb the U.S.'s nuclear waste located in Yucca Mountain, near Las Vegas, as his way into a spiraling and subtle examination of the modern city, suicide, linguistics, Edvard Munch's , ecological and psychic degradation, and the gulf between information and knowledge. Acting as a counterpoint to Yucca is the story of a teenager named Levi who leapt to his death off Las Vegas' Stratosphere Motel. It is testament to D'Agata skillful organization of the book, broken into “Who,” “What,” “When,” “Where,” and “Why,” and his use of a rapid sequences of montages—Levi's suicide is spliced with Orwellian Congressional debates on the stability of Yucca Mountain—that readers will be pleasurably (and perhaps necessarily) disoriented but never distracted from the themes knitting together the ostensibly unrelated voices of Native American activists, politicians, geologists, Levi's parents, D'Agata's own mother, and a host of zany Las Vegans. A sublime reading experience, aesthetically rewarding and marked by moral courage and humility.