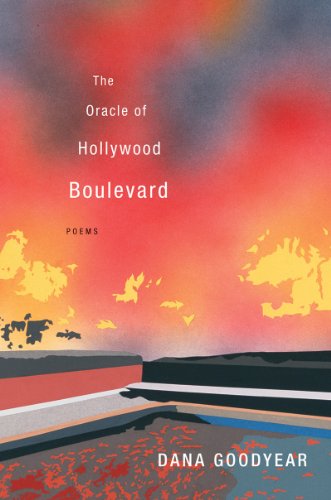 The Oracle of Hollywood Boulevard

Los Angeles provides the scenes, while femininity, fertility, motherhood, and the raw claims of the body provide the subjects, in these spiky, compressed, and serious poems from New Yorker staff writer Goodyear (Honey and Junk). At first Goodyear works hard to become a poet of place: “I drive all day under a strike surface/ scratched by skywriters’ mistakes, through the city// bleeding silver like a video game.” Soon enough, though, the spaces that matter are interiors, the poetry charged with hunger and love, anxiety and anger about female embodiment, pointing out injustice along the way. A persona poem defends, almost reluctantly, a “Pornographer at 84,” while a long poem (likely Goodyear’s best) in clipped quatrains imagines “desperate/ female souls” amid the disorienting, bodiless heads of antlered chandeliers. “Let’s make/ a baby is only a joke/ if the man says it.” It’s no joke here: Goodyear considers, in a 10-part sequence, the biology and the spiritual meanings of pregnancy, then concludes with terse, unnerving depictions of a mother and a newborn boy: “I cry because someday/ you will die and, with you, me.” Goodyear’s 2006 debut had critics asking whether she got too much attention too soon; this short, vivid follow-up, whose charged phrases bring to mind Michael Dickman and Sylvia Plath, might not put down all remaining objections, but it shows a confidence—and an emotional strength—that ought to endure. (Jan.)
close
Details