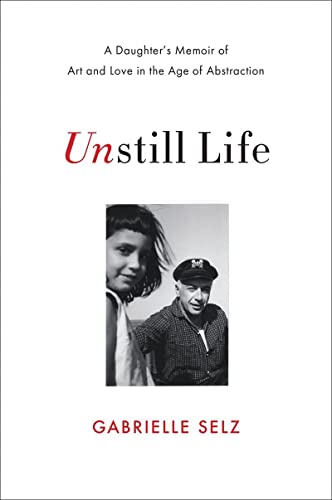 Unstill Life: A Daughter’s Memoir of Art and Love in the Age of Abstraction

The daughter of art critic and historian Peter Selz, called Mr. Modern Art when he “reigned” as the chief curator of New York’s Museum of Modern Art from the late 1950s through the mid-’60s, Gabrielle Selz fashions a profoundly moving tribute to her parents in this memoir of her childhood, from Central Park West to Berkeley. Born the same year, 1958, the family moved from Claremont, Calif., where her father taught art history at Pomona College, to take up his position at the center of the modern art scene in New York, the author had a ring-side seat amid the so-called Irascibles that made up the corps of the Abstract Expressionists ever-present at family gatherings and parties—Mark Rothko, Philip Guston, Robert Motherwell, Franz Kline, Willem de Kooning et al. The son of wealthy Munich Jews, Selz was sent to school in New York in 1937. Peter’s elegant writer mother, Thalia, was his indispensable ally in the busy, influential art circuit, although Thalia grew frustrated and bitter at his serial philandering, and they divorced in 1965, just as Peter quit MOMA to start an art gallery at the University of California, Berkeley. Thereafter, Gabrielle was split between bohemian Greenwich Village, where she lived with her mother and sister in the Westbeth artist housing project, and crackling Berkeley during its hippie heyday. All tenderly captured by an author who knows art in her bones. (May)
close
Details