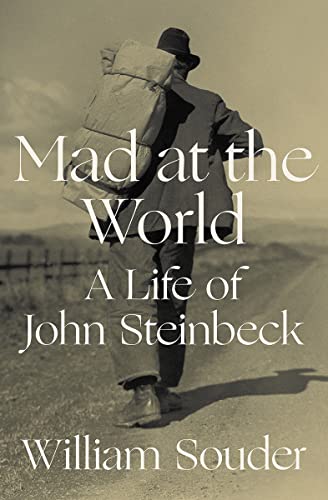 Mad at the World: A Life of John Steinbeck

Journalist Souder (On a Farther Shore) presents a comprehensive, eloquent exploration of the life and career of John Steinbeck (1902–1968). Souder begins with Steinbeck’s childhood, frequently miserable college years at Stanford (he was known to fire a gun at the wall when frustrated with his writing), and time living in a cabin on Lake Tahoe, where he toiled tirelessly on his first book, Cup of Gold, and met his first wife, Carol Henning. The novel’s unsuccessful 1929 publication was quickly followed by the stock market crash, and five years later, by his mother’s death after a protracted illness. However, out of the ashes of this difficult time came his tremendously successful novel Tortilla Flat, in 1935, and then in 1937, Of Mice and Men. Meanwhile, Steinbeck started interviewing impoverished farmers from the Dust Bowl, research that went into the arduous writing of The Grapes of Wrath. In the years that followed, Steinbeck struggled with newfound celebrity, left Carol for his second wife, Gwyn Conger, and was awarded the Pulitzer Prize. Souder neither deifies nor condemns his subject, remarking candidly on Steinbeck’s misogyny and propensity for mythmaking, while making clear the author’s ardent devotion to his craft. Steinbeck fans could not ask for a more nuanced account of this troubled giant of American literature. (Oct.)
close
Details