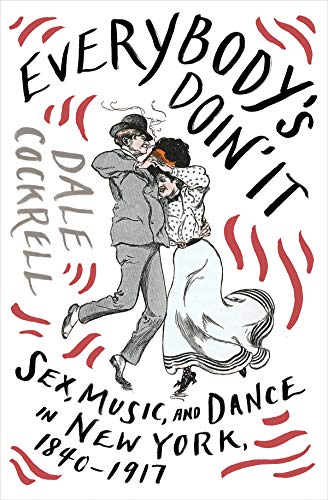 In this explosive history of sex, music, and dance in New York City, Cockrell (Demons of Disorder) details an “underworld in which legions of lower-class blacks and whites danced madly to wild music-making in the search for joy and escape.” In the 1840s, the city’s dance halls and saloons were a hotbed of prostitution—and musicians fanned the flames. Outraged reformers, investigators, preachers, and politicians fought vice by implementing license requirements for liquor and entertainment, dry Sundays, and a ban on serving booze where live music was performed. But by the Civil War, commercialized sex was the city’s second-largest industry, with 400-plus musicians playing in bars and brothels. By the turn of the century, heavily syncopated ragtime was moving young New Yorkers, as Cockrell writes enthusiastically, “in fresh, sexy, uninhibited ways”; “tough dances” such as the hug-me-tight, the Bowery glide, and the turkey trot became ubiquitous. In 1913, a whopping 1,300 musicians were playing the circuit. Then came 1917, when the onset of WWI led the War Department to crack down on the so-called tenderloin districts: musicians lost gigs, and duos such as Vernon and Irene Castle performed sterilized versions of popular dances. Cockrell’s fascinating story and soundtrack of disorderly old Gotham will delight New York City historians and music buffs alike. [em](Aug.) [/em]
close
Details