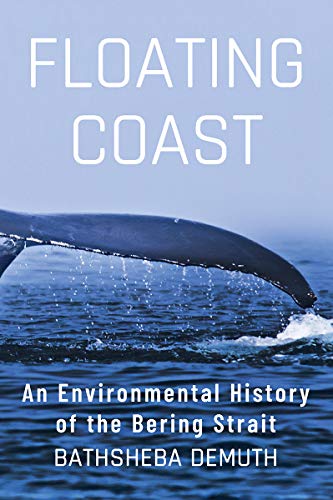 Floating Coast: An Environmental History of the Bering Strait

In this detailed, sometimes poetic exploration of the Bering Strait, Demuth, an environmental historian at Brown University, reveals the area is not, as people sometimes imagine, a “beautiful but essentially static place... untouched by people.” While tracing the life cycles of wild animals there, including foxes, walruses, and whales, she also moves across the Chukchi and Seward peninsulas in Russia and Alaska, respectively, tracking the lives of their human inhabitants. Throughout, Demuth emphasizes the Bering Strait as a point of intersection between the human and natural worlds. Early chapters, for example, deal with how, in the 19th century, the blubber of bowhead whales “lubricated a mechanizing country: first, greasing sewing machines and clocks, and then the cotton gin and power looms.” Subsequent discussions focus on the Beringian land itself—“too cold for corn, or wheat, or even, in most places, potatoes”—and the reindeer that thrived there. Later sections on how the early 20th-century gold rush in Nome, Alaska, attracted hopefuls from around the world prove equally fascinating. They speak to the complexity of the area in general and to its fascinating legacy, a history Demuth’s authoritative chronicle conveys with both insight and, in an era of climatic peril, urgency. With 18 photos and 7 maps. (Aug.)
close
Details