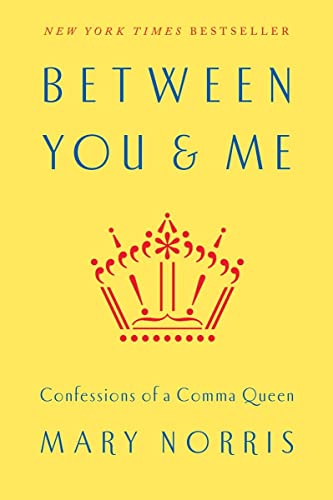 Between You & Me: Confessions of a Comma Queen

Norris has spent more than 35 years in the New Yorker’s legendary copy department, earning the nickname Comma Queen along the way. So it makes sense that her first book is a delightful discourse on the most common grammar, punctuation, and usage challenges faced by writers of all stripes. Not surprisingly, Norris writes well—with wit, sass, and smarts—and the book is part memoir, part manual. She recounts the history of Webster’s Dictionary; explains when to use who vs. whom and that vs. which; distinguishes between the dash, colon, and the semicolon; delves into the comma and the hyphen; and weighs in on the use of profanity in writing. Norris also finds ways to reference the Lord’s Prayer, the Simpsons, Moby-Dick, and, in a touching anecdote, her own sister. The New Yorker has an unconventional house style—for instance, the magazine uses diaeresis marks in words like coöperate, where the prefix (co-) ends in the same vowel used at the beginning of the stem (operate), to indicate that the vowels are pronounced differently—and, though Norris doesn’t always agree with its strict style rules, readers may not agree with her ideas on language. But it’s a sure bet that after reading this book, they’ll think more about how and what they write. [em]Agent: David Kuhn, Kuhn Projects. (Apr.) [/em]
close
Details