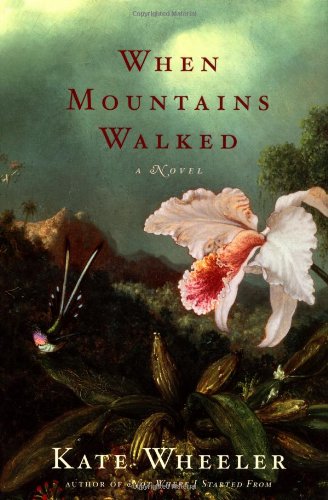 Eagerly awaited since Wheeler's debut short story collection, Not Where I Started From, this atmospheric, insightful and suspenseful first novel confirms the ambitious range and depth of her literary skill. The narrative intertwines the story of two women struggling to define themselves in the vortex of overbearing men. Assigned to Peru as health care workers, Maggie Goodwin and her husband, Carson, find themselves in Piedras, a remote, primitive village set in a deep river canyon, not far from where, 60 years earlier, Maggie's grandmother, Althea, and her husband, seismologist Johnny Baines, suffered the tragedy of their baby son's death. In alternating accounts, Wheeler depicts both women's lives, each of them suffocating in the shadow of a domineering, ambitious husband and facing wrenching dilemmas concerning the father of the babies they have conceived. If these mirror-imaged lives seem too conveniently symmetrical, Wheeler adroitly emphasizes their differences as well. Now 79 and dying, Althea made a momentous decision in India, and preserved her marriage at the expense of truth. Maggie wants to emulate her grandmother's adventurous life, but knows Althea is emotionally dislocated from her true identity. Smoldering against Carson's chauvinistic behavior, Maggie is drawn to Comandante Oquendo, aka Vicente Quispe Cruz, the benevolent leader of a failed terrorist group called Black Rainbow, now in hiding from the Peruvian military, whose dealings in the cocaine trade brought fleeting semiprosperity to Piedras and fostered democratic cooperation among its citizens. When Carson discovers that the Canadian owners of a privatized gold mine in the hills above the village have callously poisoned the district water supply with toxic effluents, causing malformed babies and serious health problems among the peasant populace, he and Maggie enlist Vicente's support. Vicente exhibits the bravery and intelligence of a natural leader, and his innate idealism stands in contrast to Carson's stubborn self -importance. It is inevitable that Vicente and Maggie become lovers, and that her naivete about their future together will lead to a crisis culminating in Maggie's transformation from an easily cowed marital subordinate to a courageous, morally sure woman. Maggie's epiphany occurs when, alone and hiding from soldiers in the forest, she finally understands the nature of selfhood and of commitment, and determines the direction of the rest of her life. Wheeler's descriptions of the interior of Peru are both lush and graphic, conveying the ""pulsing, vivid heat'' in sensuous terms, the abject poverty of the villages as well as the harsh beauty of the landscape. Ably articulating the themes of a woman's role as wife and mother in a patriarchal society, and the political realities that occur when relentless economic deprivation victimizes people in Third World cultures, she has written a psychologically lucid and emotionally resonant novel. Agent, Denise Shannon. 3-city author tour. (Feb.)
close
Details