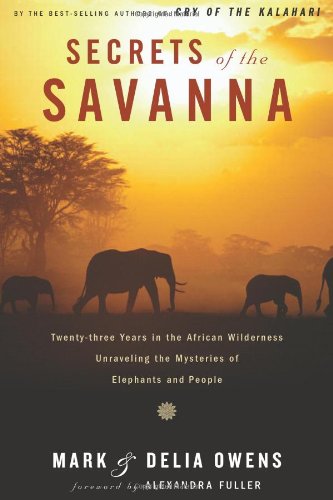 Secrets of the Savanna: Twenty-three Years in the African Wilderness Unraveling the Mysteries of Elephants and People

This is a fascinating look at the interplay of social and wildlife upheavals in Africa in the early 1990s and a worthy follow-up to the authors' . They describe traveling to the "remote and ruggedly beautiful" Luangwa Valley, in northeastern Zambia, to help save the North Luangwa National Park, where the elephant population had been decimated by poachers. The pair alternate writing chapters, with Mark presenting historical background to the region's human and animal problems and describing interactions with corrupt government security officers who eventually force the Owenses from Zambia. Although Mark's writing is vivid, Delia's chapters present the book's most moving scenes, featuring the day-to-day life of the animals and the social disruption caused by poaching: she sees teenage elephants, deprived of adult guidance because their parents were killed by poachers, living "in an elephant version of ." She also lovingly showcases an orphaned elephant named Gift, whose journey from baby to mother represents hope for the region, realized with the current Zambian president's progress in fighting corruption and maintaining the Owenses' work. 8 pages of color photos not seen by ; 2 maps.