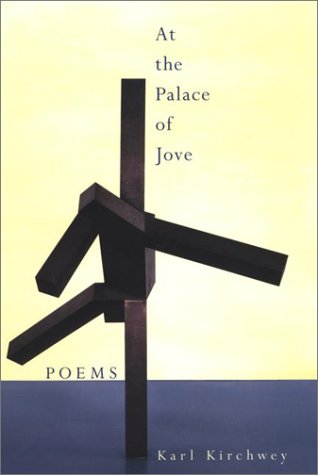 AT THE PALACE OF JOVE

Former director at the Unterberg Poetry Center at the 92nd Street Y in New York, Kirchwey published his first three collections in the previous decade, beginning with 1990's and continuing on to (1998). His first 21st century volume finds Kirchwey still looking back to the classical world for inspiration and tropes to deal with loss, loneliness and nostalgia and for modern atrocities eerily in line with the horrors of Greek drama: "Blown up by the guns of knowledge, four walls of a schoolhouse/ stagger back, lost in the gold of a glade...// and the brain of Pajazit Deliaj placed on a mattress/ to witness his murdered wife Hava's body." Kirchwey divides the book into "Satires" "Anatomies" (such as the above poem on the war in Kosovo) "Elegies" and "Imitations." Most successful are the "Elegies"—not strictly poems of mourning, but quiet inquiries into "what the mind does/ to compensate for the spiritual silence." In "Creusa (after Aeneid, Book II)," a poem for the poet's mother or perhaps merely for innocence lost, the mother refuses to appear, as did Aeneas's, bearing knowledge from a higher plane—or even "Her Benson & Hedges and her glass of vodka." Concerned with memory and ways of fruitfully processing pasts personal and historical, the poet takes stock of the might-have-beens and alternate lives, finding "We have built lives, citizens/ apart." This line is classic Kirchwey: in summing up 2,000 plus years of social thought, it takes one of the tiny rhetorical steps that separate people until "all is covered/ all is nonchalance/ between us."