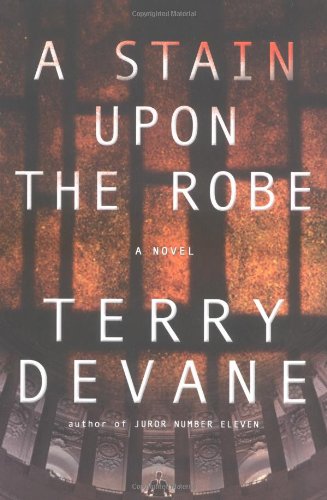 A STAIN UPON THE ROBE

Despite its creaky, sensationalistic plot, Devane's third legal thriller (after ) satisfies, largely on the strength of its leads. This time, smart, depressive criminal defense attorney Sheldon Gold is approached by old flame Judge Barbara Pitt, who's presiding over the page-one trial of a Catholic priest accused of raping 23 boys. Judge Pitt says she's mystified by the recent disappearance of her hunky young research clerk, Charles Vareika, after admitting to sleeping with him. Afraid of a Gary Condit–type scandal, Pitt implores Shel to find Vareika without implicating her or tanking the trial. Shel mobilizes his usual team: Mairead O'Clare, the naïve but tough young associate; Pontifico (the Pope) Murizzi, a street-smart, gay ex-cop turned private investigator; and Billie Sunday, a legal secretary with impeccable instincts and candid opinions. The pseudonymous Devane constructs the plot through a rather blocky series of interviews, as the team makes its rounds interrogating Vareika's unsavory friends, Pitt's cagey family members, several trial-watchers with competing agendas and the accused priest himself. Characters tend to speechify rather than speak; the priest takes a page from Hannibal Lecter when he insists on meeting Mairead in his lockup (" 'I really enjoy telling [my story], young lady.' Now [he] pressed his nose against the screen, distorting his face into a gargoyle's mask. 'I really, really do' "). Devane compensates for much of this artificiality by demonstrating hands-on intimacy with Boston's criminal justice system and by creating soulful, savvy, appealing protagonists who manage to excel at their jobs, despite the heartbreak in their private lives.