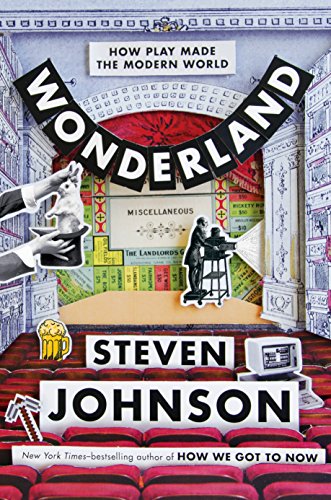 Wonderland: How Play Made the Modern World

In this charming study, Johnson (How We Got to Now) examines how the seemingly frivolous and unproductive aspects of society—the things people do for fun, pleasure, and entertainment—have influenced, defined, and created the world. “This is a history of play,” he writes, “a history of the pastimes that human beings have concocted to amuse themselves as an escape from the daily grind of subsistence.” According to Johnson, the development of music led to the computer age, the invention of public eating and drinking establishments progressed to cultural and ideological revolution, and games of chance inspired the creation of whole new mathematical fields. In food, fashion, athletics, and commerce, Johnson explores the surprising ways in which one discovery follows from another, often over the course of centuries. “Ignore the pleasure those institutions generated,” he suggests, “and focus on the innovations or historical sea changes they helped bring about: public museums, the age of exploration, the rubber industry, stock markets, programmable computers, the industrial revolution, robots, the public sphere, global trade.” In an entertaining and accessible style, he takes tangents that arrive at sometimes startling conclusions, like a magician practicing misdirection. Less focused on the why than the how, Johnson connects the dots in a way that sheds new light on everyday concepts. (Nov.)
close
Details