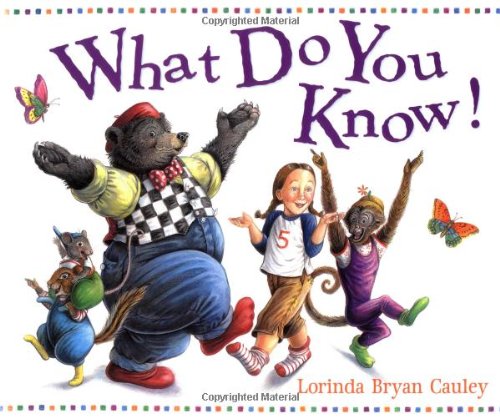 WHAT DO YOU KNOW!

In each spread of this picture-book primer, Cauley () asks young readers to test their knowledge of basic concepts such as ABCs, rhymes, pairs and opposites. For example, one spread shows Cauley's cast—a multicultural group of children and their anthropomorphized animal friends—mixing paint to decorate a doghouse. "Red mixed with white/ makes the color pink./ Two colors make green./ Which ones do you think?" In most paintings, she plants clues prominently. A few spreads, however, may confuse youngest children (e.g., one asks readers, "What do you think is the opposite of frown?" but shows no smiling faces). Chipper rhymes keep this from feeling like lessons, though the compositions often seem static. Ages 4-8.