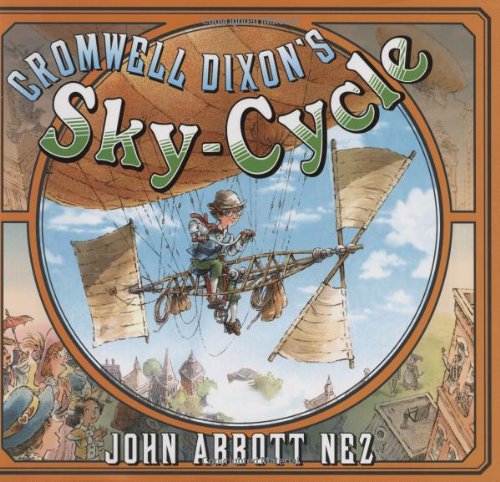 Nez ( ) introduces an obscure figure in flight history with engaging artwork that jazzes up this jaunt to a golden age of invention. In the early 20th century, 14-year-old inventor Cromwell Dixon, obsessed with airships like many Americans at the time, begins work on one of his own. He “took apart his old bicycle and rebuilt it in a different way. Land's sake! What a mixed-up contraption began taking shape in the barn.” Despite one major setback and with the help of his patient mother, Cromwell finally pedals his machine aloft over Columbus, Ohio. Set mostly against a robin's-egg blue sky, the detail-rich scenes (Nez even captures the wry expressions of some chickens put out when Cromwell lands on their coop) offer ground-up and bird's-eye views of the action. Nez's direct-from-Main-Street narrative (“that boy had more gumption than a gopher”) and cartoons present a keen, smiling Cromwell not easily deterred—his attitude will be infectious. Brief endnotes and photos of Cromwell, his mother and his flying machine conclude this cheery portrait of “America's Boy Aeronaut.” Ages 5–up.