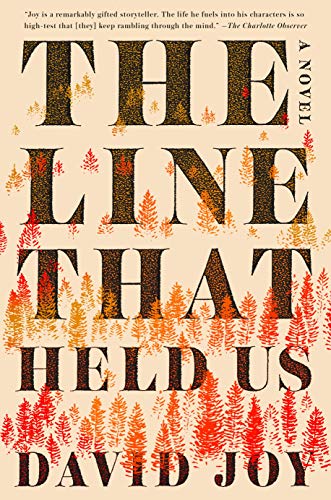 The Line That Held Us

Joy (Where All Light Tends to Go) pulls no punches in this stark and violent examination of sacrifice and suffering. After Darl Moody accidentally shoots and kills Carol “Sissy” Brewer while hunting, he enlists his best friend, Calvin Hooper, to help hide the body, as he fears the retaliation of Sissy’s savage, hulking brother, Dwayne. Rightfully so, it turns out, as Dwayne sets out for savage revenge after he can’t find his brother and comes across blood traces in an area where he normally digs for ginseng. Instead of focusing on salt-of-the-earth Darl, Calvin, and Calvin’s girlfriend, Angie, who form a pact to cover up the crime, the narrative centers on Dwayne; his fixation on maniacal justice as he hunts down and exacts revenge is terrifying yet complicated through haunting glimpses of his abusive childhood and dedication to his family. The eerie presence of Sissy’s dead body throughout the novel, meanwhile, compounds the paranoia that builds alongside Dwayne’s and Calvin’s troubled ruminations, culminating by the end in the powerful possibility of collective redemption. Fans of Frank Bill and Cormac McCarthy will enjoy this gritty thriller. Agent: Julia Kenny, Dunow, Carlson & Lerner. (Aug.)
close
Details