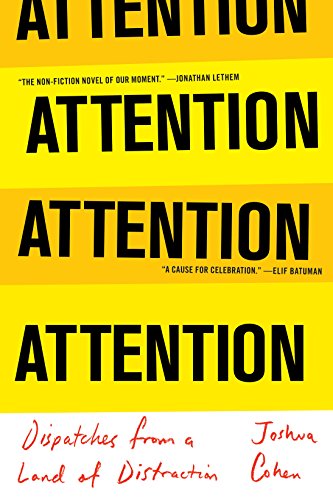 Attention: Dispatches from a Land of Distraction

In this debut nonfiction collection, novelist Cohen (Moving Kings) muses on a variety of subjects, including politics, linguistics, history, and religion. Though the opening essay—a lament on the shallow state of societal discourse in a world crowded with distractions—is a bit stale, Cohen picks up steam in the second selection, an excoriating look at his native Atlantic City’s economic decline as an extended metaphor for President Trump’s failings, both personal and professional. In book reviews and literary essays, Cohen gives careful consideration to the work of Jonathan Franzen, Gordon Lish, and Thomas Pynchon, among others. A fascinating piece on German-Jewish fencer Helene Mayer, who competed for Germany at the 1936 Olympics, is filled with gems of historical insight, such as how European Jews had long used fencing as a “formal, relatively nonviolent way to respond to anti-Semitic provocations.” Cohen can be pretentious or obtuse, particularly in the random diary entries sprinkled throughout: “Avoid imagination,” he instructs, since “it is merely the plagiarism of your inexperience or ignorance.” At its best, Cohen’s work evokes comparisons to Gore Vidal in tone and purview, but the author lacks consistency. [em](Aug.) [/em]
close
Details