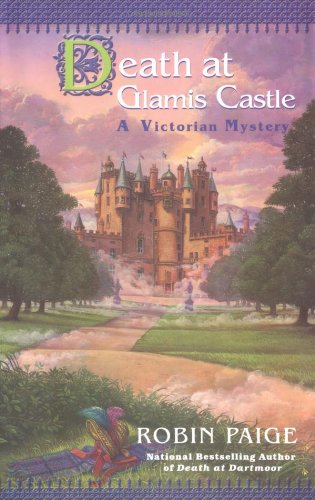 Paige's ninth Victorian mystery (after 2002's ) enmeshes married sleuths Lord Charles and Kate Sheridan yet again in royal intrigue and scandal, but with less success than usual. The Sheridans' holiday is interrupted by a summons from Edward VII to investigate strange occurrences at legendary Glamis Castle. The old story of the Monster of Glamis—a half-man, half-monster rumored to be a deformed scion of a noble family—gains new life when the castle's labyrinthine quarters are used to conceal the presence of Lord Osborne, who lives in isolation, tended to by a small staff of servants. Osborne's disappearance, which coincides with the brutal slaughter of a housemaid, proves worthy of the king's attention when the Sheridans learn that the victim's throat was slit in a manner consistent with the crimes of Jack the Ripper—and that Osborne is actually the king's eldest son, Edward, duke of Clarence, himself a one-time Ripper suspect, whose death was announced by Buckingham Palace a decade earlier. Although the Sheridans "solved" the Ripper murders in the earlier , they can't eliminate the duke from suspicion. Their inquiry takes place amid increasing British tensions with imperial Germany, which adds a potential espionage angle to the murder. While the book is a quick read, there's little suspense or deduction, and the pleasant if underdeveloped main characters don't do enough to hold the reader's attention.