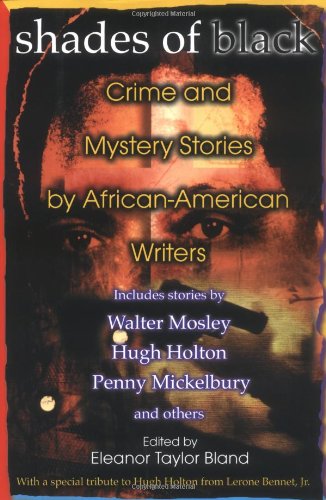 SHADES OF BLACK: Crime and Mystery Stories by African-American Writers

Talking about African-American mystery writers, editor Bland says, "In my opinion, the most significant contribution we have made, collectively, to mystery fiction is the development of the extended family; the permanence of spouses and significant others, most of whom don't die in the first three chapters or by the end of the novel; children who are complex, wanted, and loved; and even pets." And while some of the 22 stories in this excellent anthology are as hard as nails and as noir as a night in Thompsonville (such as Gary Phillips's "Beginner's Luck," which stars Chainey, his no-nonsense former Las Vegas stripper, and Walter Mosley's short, pungent "Bombardier"), most of them do have a strong sense of family. Bland's own "Murder on the Southwest Chief," written with her 15-year-old son, Anthony, has her suburban Chicago cop Marti MacAlister using her sons' journals to solve a crime. Frankie Y. Bailey's "Since You Went Away" is another corking railroad yarn, featuring Lizzie Stuart's grandfather, a Pullman porter, in a tale of jealousy and sexual repression in 1946. The feeling of extended family includes a tribute to the late Hugh Holton, a Chicago police captain and prolific mystery writer, by historian Lerone Bennett Jr., even though Holton's own entry, "The Werewolf File," is a dark and rather bloody tale. Some of the other contributors' names may be new to casual mystery readers, but part of the pleasure of this wide-ranging volume is welcoming them to the family.