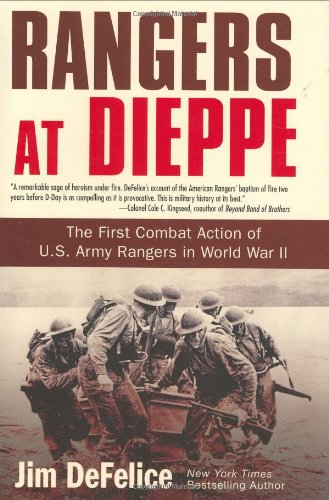 DeFelice (Leopards Kill) takes a fresh look at the disastrous 1942 Allied landing at German-occupied Dieppe, France, from the perspective of the 50 U.S. Army Rangers scattered among the British Commando units and the Canadian 2nd Division, which spearheaded the assault. With an eye on gaining experience in amphibious operations, the 50 Rangers were selected from the 1st Ranger Battalion, formed just months before Operation Jubilee, the code name for the raid at Dieppe. Beset by “poor planning, insufficient training, and inadequate support,” the assault—among a series of raids intended to harass the Germans and boost Allied morale—was a sanguinary disaster. The Canadians suffered 67% casualties and the Rangers 22%. Noting Dieppe’s lack of military importance, DeFelice rejects the notion that it was “a brutal but necessary rehearsal for D-Day,” concluding that it was “an unnecessary and foreseeable fiasco.” DeFelice honors the courage of the men on the ground, however, including Lt. Edwin Loustalot, Pvt. Owen Sweazey, Cpl. Franklin “Zip” Koons and Sgt. Alex Szima. Carefully researched and vividly told, this popular account of the blooding of the now iconic Rangers will appeal to fans of military history. (Jan.)