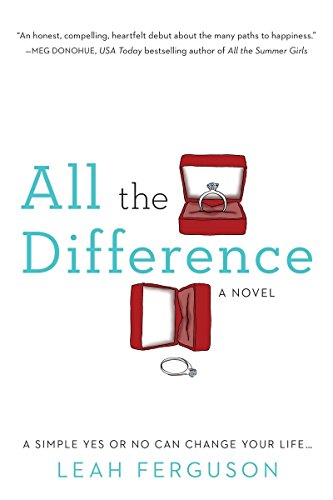 In her stirring debut, Ferguson takes inspiration from Robert Frost's "The Road Not Taken" and turns it into a moving story about the consequences of choices. As the story begins, it seems that public relations whiz Molly Sullivan has it all—good friends, a loving boyfriend, a job she loves. But a positive pregnancy test turns her carefully controlled world on its ear. Before she can tell her boyfriend Scott that they're expecting, he proposes to her at a New Year's Eve party. The choice to marry, at first, seems as if it has an obvious answer: yes. But for the remainder of the novel, Ferguson leads Molly down two separate paths, with chapters marked "If She'd Said Yes," or "If She'd Said No," month by month, as Molly's body grows with their child. At the end of the book, which wraps up with another New Year's Eve party, it's abundantly clear to Molly—and readers—which choice was the right one. Sprinkled in are well-developed, sympathetic characters, including Molly's best friend, Jen, and her husband, who are trying unsuccessfully to get Jen pregnant, and Scott's over-the-top mother, Monica, as well as the hero and heroine themselves. Though the alternating parallel universe structure isn't a new tactic, readers will nevertheless cheer right along with Molly as she finds the path she's intended to follow. A bittersweet yet satisfying treat. (Sept.)
close
Details