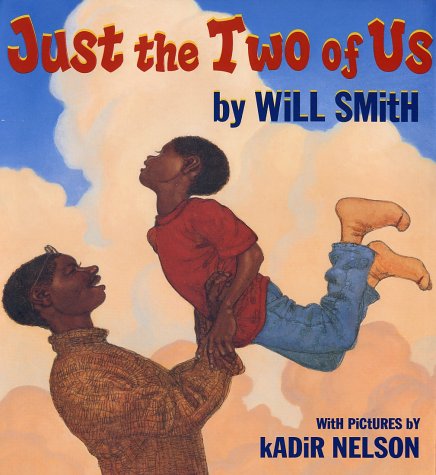 JUST THE TWO OF US

Grammy-winner and actor Smith presents the lyrics of his hit song that borrows the refrain, "Just the two of us,/ Building castles in the sky./ Just the two of us,/ you and I," in its celebration of a father's love for his son. Featuring various fonts and type sizes for emphasis, the text scans best with Smith's rap delivery: "Sometimes I wonder what you're gonna be/ A general, a doctor, maybe an MC./ I wanna kiss you all the time/ But I will test that butt when you cut out of line./ Why'd you do that?" As he pledges devotion and offers advice to his son, the narrator's sentiment shines with sincerity. Describing the night he brought his newborn son home from the hospital, Smith states, "That night I don't think one wink I slept/ As I slipped out of my bed, to your crib I crept/ Touched your head gently, I felt my heart melt/ 'Cause I knew I loved you/ more than life itself." Emotion also runs deep in the paintings, which show the boy growing into a youth. The pictures rely on fairly conventional imagery: father holding up infant son against the sun, the two viewed in profile; father and mature son in thoughtful conversation on a beach at sunset. But Nelson effectively conveys the affirming message of the text. All ages. ()