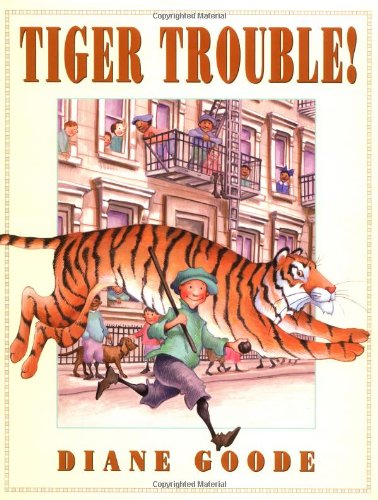 Curiosity saves the cat in Goode's (; ) fluffy picture book about the adventures of a boy and his pet tiger in New York City. Young Jack and his tiger, Lily, are the best of friends. From hanging out on the front stoop to playing stickball and visiting the playground, they while away days full of good times. But everything changes when crabby, cat-hating Mr. Mud purchases Jack's apartment building and moves in upstairs. Mr. Mud demands that Jack get rid of Lily, who "could scare someone!" The crotchety landlord changes his tune, however, when Lily uses her instincts to catch a burglar in Mr. Mud's apartment. Goode's light-hearted story teeters between fantasy and reality, providing the kind of larger-than-life scenario that often springs from children's imaginations. The sweet, smiling faces of Jack and his young friends, as well as the almost comical scenes of tiger and boy scrubbing up in the tub, taking a swim and curling up in bed, sustain the cheerful mood. A pastel palette textured with cross-hatching, invites readers to a pristine-looking Big