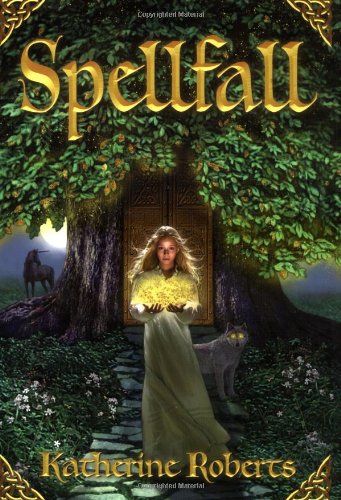 While Roberts () creatively blends aspects of modern society with traditional elements of fantasy, the novel is ultimately weighed down with explanations of the inner workings of Earthaven, an imaginary parallel world. Natalie lives in an "eco-friendly" suburban development with her alcoholic father, stepmom and stepbrother until Hawk, an evil wizard (or Caster), kidnaps her. He knows something that she does not: her late mother was a Spell Lady and Natalie inherited her powers. Hawk plans to use Natalie to invade the enchanted Earthaven and poison a soultree (an intelligent, spell-producing organism) with a chemical solution. It's up to Natalie and her allies—who include her stepbrother; Hawk's bumbling son, Merlin; a wolf that can communicate with her; and some unicorns—to stop him. Like Philip Pullman's daemons, the characters here possess "familiars" (animal companion/soulmates). Timely examples lend the narrative immediacy (e.g., to prevent the poisoning from being fatal, Merlin must teach the soultree what he knows about fighting computer viruses), but Roberts switches between so many places and characters that readers may have trouble keeping track of the story line and all of Earthaven's rules. These challenges, plus the fact that Natalie learns little about making magic, may leave readers disappointed. Ages 9-up.