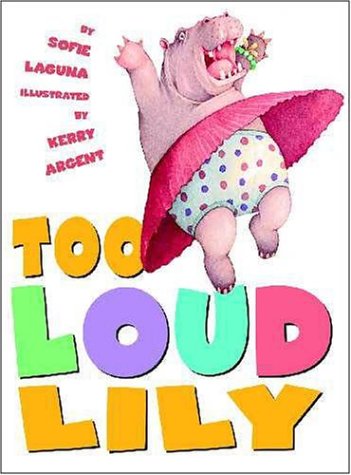 The star of this tale from an Australian team, a galumphing hippo named Lily, seems incapable of being quiet despite the urging of her family and friends. When she reads, Lily's loud guffaws at the book she's chosen (titled ) offends the household. At school, Lily laughs so noisily at her best friends' secret note that all three of them get sent to the principal's office. Argent's ( ) clever, well-modulated watercolors, in dropout vignettes and spreads, wring every ounce of humor out of the story. The principal, M. Savage, is glimpsed through his office window as a dinosaur silhouette while Lily's teacher is a stiff-necked bird sporting glasses. The new drama and music teacher, Miss Loopiola, on the other hand, is not only a hippo herself, but eccentrically resplendent in a red poncho, several earrings and nail polish. She notices that while the rest of the class does a "fast-stomping dance," poor Lily is trying to dance quietly en pointe. She asks Lily not simply to dance louder but to lead. Predictably, Lily triumphs at the performance. " 'Go on Lily,' whisper[s] Miss Loopiola. 'Nice and !' " At the end, the sound of the audience cheering for Lily is "very, very —a bit like Lily." This ingenue has definite charisma. Ages 3-5.