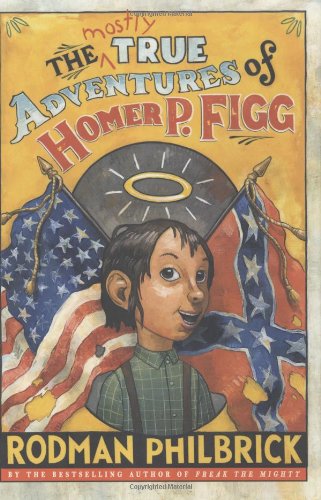 Philbrick ( ) offers rip-roaring adventure in this Civil War–era novel featuring a mistreated orphan who doesn't let truth stand in the way of spinning a good yarn. When his guardian, Uncle Squinton—“the meanest man in the entire state of Maine”—sells off Homer P. Figg's older brother, Harold, to take a rich man's son's place in the Union army, Homer can't just stand around doing nothing. Determined to alert the authorities (and his brother) that Harold is too young to be a soldier, the plucky narrator traces the path of the regiment. He faces many dangers, including “an abduction or two, and being robbed and thrown in with the pigs, and joining the Caravan of Miracles” before landing smack in the middle of the Battle of Gettysburg, where he reunites with his brother and more or less drives the Confederates away. The book wouldn't be nearly as much fun without Homer's tall tales, but there are serious moments, too, and the horror of war and injustice of slavery ring clearly above the din of playful exaggerations. Ages 9–12.