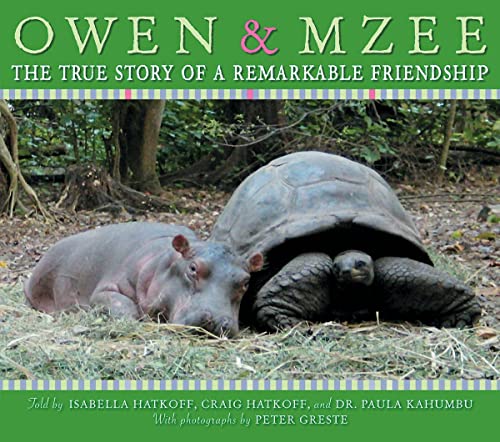 Owen & Mzee: The True Story of a Remarkable Friendship

Remarkable" seems too tame a word for this memorable book about a friendship between two wild creatures. Its genesis lay in Greste's photo of a baby hippo snuggling with a giant tortoise, which appeared in newspapers the month after the cataclysmic 2004 tsunami. Craig Hatkoff and his then six-year-old daughter, moved by that image and by the accompanying article, decided to learn more about these animal companions—and to write their story. They do so succinctly and smoothly, ably aided by Kahumbu, manager of the Kenyan animal sanctuary, Haller Park, where the two creatures now live. Greste's crisp, closely focused photos will instantly endear the title characters to readers. When the tsunami struck Kenya, Owen was separated from his mother and the rest of their pod and became stranded on a coral reef. Several spreads chronicle the hippo's difficult rescue and transport to the sanctuary. Once set loose, he immediately scrambled toward Mzee (the Swahili term for "wise old man"), a 130-year-old Aldabra tortoise: "Owen crouched behind Mzee, the way baby hippos often hide behind their mothers for protection." The unadorned text allows the facts themselves to move readers, making clear how the improbable bond between the now inseparable mammal and reptile has helped resilient Owen recover from his traumatic ordeal. ("Most [wildlife experts] have never heard of a mammal... and a reptile... forming such a strong bond.") Priceless images document the pair swimming together or nuzzling, their rough skins complementing each other. In several of Greste's photos, the two creatures appear to have genuine smiles on their faces. Readers will have the same. Ages 4-8.