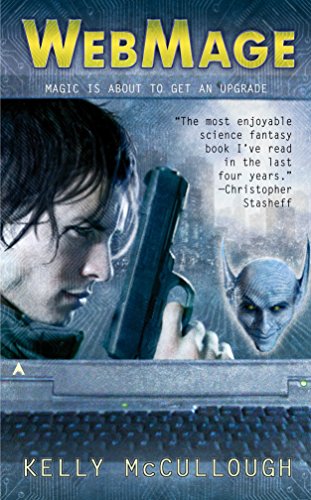 Remember the Fates, those ancient Greek spinners, weavers and snippers of life's threads? They're back in McCullough's original and outstanding debut, and still ruling destiny—but with their own digital web, based on a server called the Fate Core. Power-hungry as ever, they've coded a spell to eliminate human free will. Unluckily for them, one of their demigod descendants is a cheerfully rebellious hacker-sorcerer named Ravirn who, when not studying for college midterms, likes to mess around on their web with the help of his familiar, Melchior, who can change from a goblin to a laptop. Ravirn and Melchior, let loose in McCullough's delightfully skewed and fully formed world—much like our own, but with magic, paranormally advanced technology and Greek gods—set out to thwart Ravirn's "great-to-the-nth-degree aunt[s]," careening from one discovery to another, enlisting unlikely allies and narrowly evading destruction at the hands of both Fates and Furies. McCullough handles his plot with unfailing invention, orchestrating a mixture of humor, philosophy and programming insights that give new meaning to terms as commonplace as "spell checker" and esoteric as "programming in hex." Though a preponderance of techie-talk may put off some readers, this is the kind of title that could inspire an army of rabid fans; it's a good thing a sequel is planned for 2007.