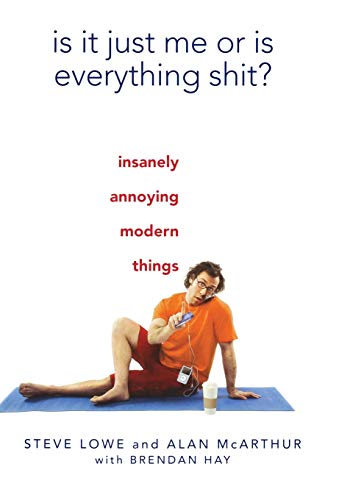 Is It Just Me or Is Everything Shit?: Insanely Annoying Modern Things

Lowe and McArthur filled two books for the U.K. market with cynically profane critiques of the ephemera of contemporary culture; this edition features material from those volumes combined with new entries from Hay, a former writer for . Nonetheless, a strong British streak running runs throughout, particularly when it comes to vocabulary such as “posh jackasses” and “cobblers to your iPod playlist.” The targets are for the most part predictable—celebrities, rich people, George W. Bush, etc. How much space a topic rates is sometimes mystifying: the entries on Chinese Communist Party and the hidden teachings of Scientology go on for several pages, yet the Blackberry rates only a single line. There’s even an entry on people in bear costumes on motorbikes advertising stuff—which, they say, “happens more than you might imagine.” It’s all amusing enough in small doses, but not quite as clever as, say, the .