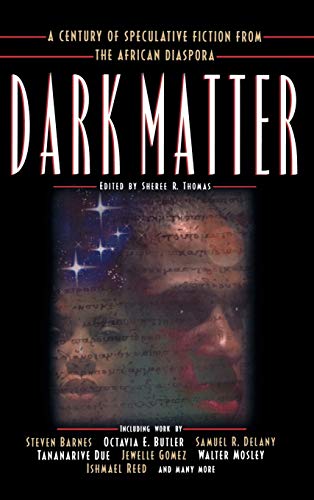 Dark Matter: A Century of Speculative Fiction from the African Diaspora

The striking central metaphor that Thomas (who edits the literary journal Anansi: Fiction of the African Diaspora) chose for this first collection of SF stories and essays by black authors is ""dark matter,"" the scientific term for a non-luminous form of matter not directly observed, but whose existence is deduced from its gravitational effects on other bodies. Ranging from Charles Chestnutt's self-parodying 1887 tale ""The Goophered Grapevine,"" to more than a dozen brilliantly diverse selections dated 2000, this big anthology includes 26 stories and excerpts from two novels, as well as five thoughtful essays from the leading black authors in the field. Accurately observing in her introduction that black writers have been engaged with speculative fiction for far longer than is generally thought, Thomas hopes her collection will inspire more black authors to enter the field, since, as Walter Mosley observes in his essay ""Black to the Future,"" this genre speaks clearly to the dissatisfied through its power to imagine the first step in changing the world. Almost all of these stories explore the profound sense of loss central to the ""black diaspora""Dloss of self-respect, loss of identity, loss of a sense of humanity itself. In manyDnotably ""Sister Lilith,"" Honoree Fanonne Jeffers's biting contemporary vision of Eve as Adam's trophy wife, Samuel R. Delany's widely praised ""Aye, and Gomorrah,"" where sexuality is sacrificed to spacefaring, and Steven Barnes's searing ""The Woman in the Wall,"" which hurls an American black woman artist into a hellish African concentration campDthe brutal common denominator is the depredation of the soul through the violation of the body. Several of these stories are almost unbearably poignant, like Ama Patterson's ""Hussy Strut,"" and many are ferociously angry, like Derrick Bell's savage ""The Space Traders."" All manifest a powerful effect, far stronger for being largely unacknowledged, and perhaps heralding, as Mosley projects, a coming explosion of black SF. Agent, Marie Dutton Brown. (July)
close
Details