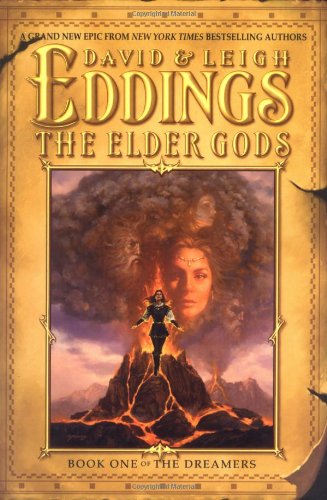 THE ELDER GODS: Book One of the Dreamers

Only die-hard fans of the bestselling Eddings duo (The Belgariad series) will enjoy this slow-moving, low-tension epic fantasy, the first in a projected four-book series. The Land of Dhrall dwells under the stewardship of four gods, each oriented with one of the four compass directions. Dahlaine and his brother, Veltan, rule the North and South, while their sisters, Zelana and Aracia, rule the West and the East, respectively. Dhrall's center is a wasteland under the control of That-Called-the-Vlagh, a dark, inhuman thing of vast patience, power and ambition. Prophesy speaks of the Dreamers, children whose dreams will defeat the Vlagh by controlling the natural forces of Mother Sea and Father Earth. Dahlaine and his siblings each raise a baby Dreamer; only after the precocious children start to dream does he reveal that they are actually fellow gods in the world's life cycle, reborn with no memory of their previous lives. Dahlaine and his siblings hire human mercenaries, who eventually meet the Vlagh's forces in battle, but the dark armies prove unexpectedly resourceful. Despite a variety of characters (pirates, gods, aboriginals, soldiers, etc.), all speak in the same unlikely, bland manner, and dialogue generally replaces action. The authors will have to pick up the pace in the next volume to keep readers interested.