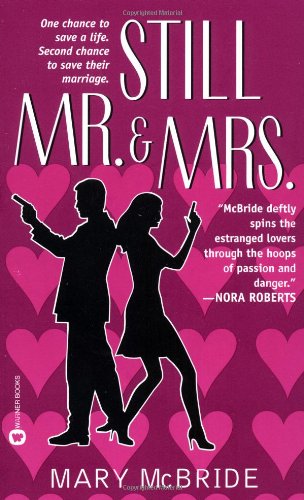 An outrageously fun setup—married but separated Secret Service agents Bobby and Angela Holland are forced to work in the home of the president's cranky mother after she receives death threats—establishes the opening tone of McBride's () contemporary romance. When emotionally reticent Bobby clams up even further after his kid brother is killed, Angela suffers six months of silence before she decides their marriage is doomed and transfers across the country to L.A. One year later, the undercover job of posing as married domestics is a nightmare for Angela and a dream come true for Bobby, whose awareness that his wife is dating a hot Hollywood star finally spurs him to bare his heart. But with Angela refusing to listen to him, his tongue incapable of saying what he wants it to, his boss questioning his professionalism and "Crazy Daisy," the president's mother, making his life as difficult as possible, Bobby suspects this job may be the end of him. As the death threats become more ominous, the tone darkens and is lightened only by Angela's frustration at playing cook instead of cop—a frustration that escalates into panic when the president makes an unscheduled visit for dinner. Like Nick and Nora Charles, Angela and Bobby play well off each other, while Daisy's sharp-tongued comments keep both jumping in this thoroughly enjoyable read.