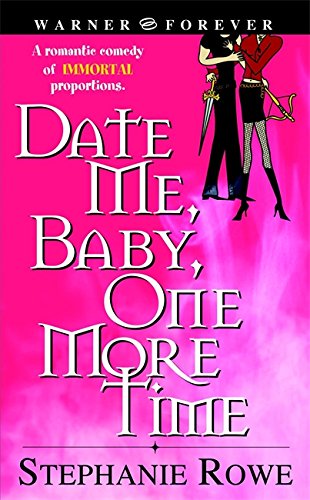 Date Me, Baby, One More Time

Rowe carves out her very own niche—call it paranormal romance adventure comedy—with this freewheeling series kickoff. The novel introduces Justine Bennett, the immortal guardian of the Goblet of Eternal Youth (an espresso machine named Mona), and her former bombshell of a roommate, Theresa Nichols, now an 11-foot-tall fire-breathing dragon. They've watched over Mona for 200 years, but now hunky pretzel mogul Derek LaValle is certain that beheading Justine and taking Mona will break the family curse that leaves every LaValle man dead at 31. If Justine fails to protect the Goblet by killing Derek, she'll face the Chamber of Unspeakable Horrors and her mother will be sent to hell as Satan's eternal love slave. Naturally, Derek and Justine fall for each other and start a rocky courtship full of he said–she said and "who tried to kill whom first" arguments. The leads spar winningly, and Rowe's lusty, maudlin Satan is hilarious. The plot gets tangled at times, and a share of the jokes—as well as the adult material—are straight up groaners (including sex-starved Justine fighting off the advances of an army of evil, gorgeous men called Penhas—say it out loud for full effect), but Rowe's wit and imagination make this a strong start for what should be a refreshing series.