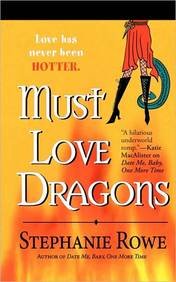 A hungry, heartsick 11-foot-tall dragon takes center stage in Rowe's second paranormal tale of Manhattan's "Otherworld," fighting the loneliness of big-city apartment life with a wicked, claw-curling cybersex partner. Theresa Nichols, a winning supporting character from Rowe's , has for the past 200 years been stuck in the body of a dragon, due to an ill-advised drink from Mona, the Goblet of Eternal Youth (who lives in Theresa's apartment, disguised as an espresso maker). In order to meet her cyberlover, Zeke Siccardi, Theresa makes a deal with the Devil, a villain torn between world domination and his hunger for love ("Yes, I am Satan, and I deserve more than empty sex"), to turn her back into a woman for her date. Zeke, however, already knows Theresa's secret—he's an ex-dragonslayer, and he's been hired to find her. When it turns out Zeke's employer, another dragon named Lynam Peressini, wants Theresa dead, Zeke does the honorable thing, vowing to protect Theresa—if he can just suppress his imperative urge to kill her. Rowe keeps her strange island afloat with snappy patter, goofy good humor and enormous imagination. Strong but strange, this is one of those love-it-or-hate-it genre-twisters that will make readers either rabid for more or ready for a good old-fashioned Regency.