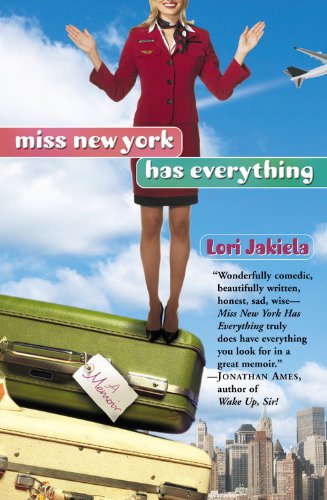 Miss New York Has Everything: A Memoir

Don't let the smiling stewardess on the cover fool you: Jakiela's memoir has more in common with Chuck Klosterman than The early story focuses on the author's 1970s childhood in a working-class Pennsylvania town, especially on her father, a factory worker who considered other people "cockroaches," but doted on his pet miniature poodle. She dwells on her love of '70s pop idols like Shaun Cassidy and explains that her decision to abandon a career as a journalist and writing teacher to become a flight attendant was inspired by a childhood admiration for Marlo Thomas and . Unsurprisingly, Jakiela discovers life in the skies isn't really glamorous, and the job quickly takes an emotional toll. "My world started to shrink down to small spaces," Jakiela writes, an endless chain of jet cabins and hotel rooms. But there are also poignant moments in brief portraits of colleagues and passengers, and more than enough proof that Jakiela's decision to pursue a writing career was the right move.