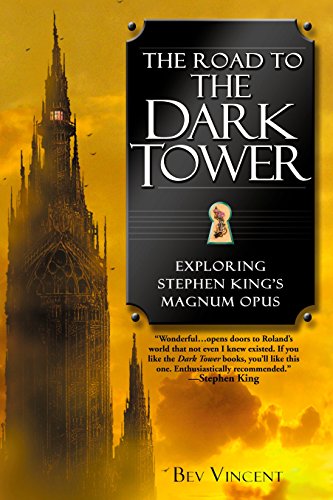 How does one determine what the greatest work of an author's career is? The answer to this query, posed in the final pages of this book, can be found throughout Vincent's in-depth analysis of King's seven-volume Dark Tower epic (The Gunslinger, The Drawing of the Three, etc.). Making sense of a story that switches back and forth through time, across multiple universes, and involves the safety of a tower that represents the fate of all existence is no easy task. Kudos to Vincent for even trying. But readers beware--the work is analyzed in its entirety, so expect spoilers galore. Vincent--whose column on Stephen King, ""News from the Dead Zone,"" appears in Cemetery Dance magazine--tracks the evolution of both King's three-decade avocation (the very first line was written in 1970) and the development of the saga's characters and plot. Most importantly, Vincent shows how the few members of gunslinger Roland's fellowship, recruited to help him protect the Tower, slowly evolve from reluctant participation to resolve about their leader's quest. Former cocaine addict Eddie, for example, puts his sarcasm and skepticism aside and learns to embrace the dream of his surrogate father. As Vincent writes, ""If Roland were to die on their journey, Eddie would continue with the others, for having dreamt of the Tower and the field of roses, the compulsion to reach the Tower claims him, too."" Vincent also devotes a full chapter to discussing some of King's other works that are related to the Dark Tower series, such as Hearts in Atlantis and Insomnia. In light of King's own admission that the Dark Tower epic is the nexus of all his books--""The Dark Tower finishes everything that I really wanted to say""--Vincent asserts, ""What else, then, is a magnum opus if not something that both ties together and summarizes a person's life's work?"" With this thorough analysis of King's epic, Vincent proves himself a master of the Dark Tower world.
close
Details