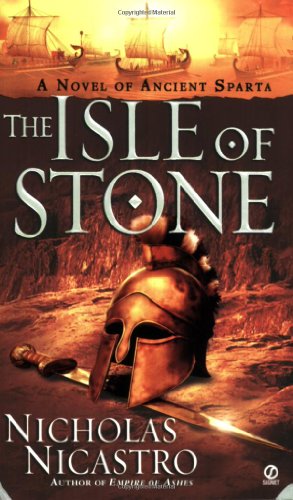 The Isle of Stone

Having brought John Paul Jones and Alexander the Great to life, Nicastro ( ) turns his formidable skills as a historical novelist on an obscure episode in the Peloponnesian War, that almost three-decade conflict between Athens and Sparta, which he labels antiquity's "war to end all wars." The choice to have a narrow focus, rather than an all-encompassing epic sweep, proves a wise one, as it enables Nicastro to go into nitty-gritty detail about the lifestyles of Greece in 425 B.C., making the harsh Spartan attitudes, for example, comprehensible, if not acceptable, to a modern sensibility. The author instills emotional depth in his three main characters—Damatria, a wealthy Spartan woman, and her two sons, Antalcidas and Epitadas—and the supporting cast through adept use of the telling descriptive phrase. The careful research and study that went into this book should enthrall fans of the classics, military history buffs and general readers.