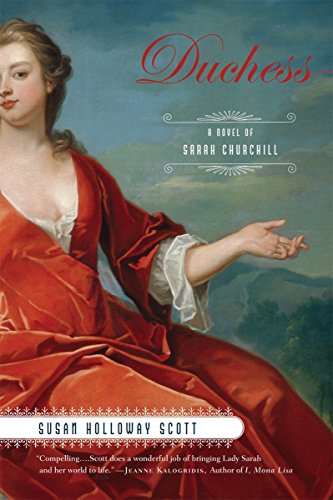 Duchess: A Novel of Sarah Churchill

Sarah Jennings's ascent from poverty as a 13-year-old to the highest echelons of late 17th- and early 18th-century English society has all the trappings of supermarket tabloids: intrigue, treachery, deceit and sexual scandals. In this first-person telling, Scott takes a near-scholarly approach but maintains the thrills as Sarah and her equally ambitious husband, John Churchill, risk charges of treason (and thus, their necks) to ensure the crown for Anne Stuart. Sarah and John become the ultimate power couple: she gets her way, her riches and her title nearly without sacrificing her own principles, while John, despite his personal ambition, seeks the best for his family and country, becoming England's greatest military hero. If each is a bit too good to be true, that is a hazard of the first person and is easy to overlook with two such interesting and able characters. That Sarah is an ancestor of both Winston Churchill and Lady Diana Spencer gives this novel appeal to several generations of historical fiction readers.