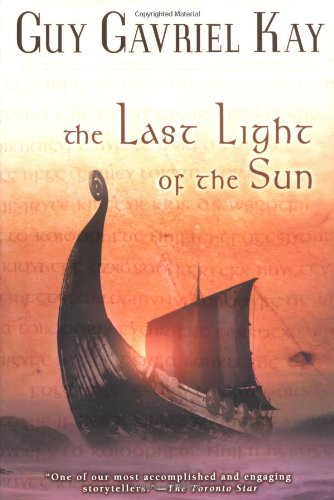 THE LAST LIGHT OF THE SUN

In this wonderfully imaginative historical fantasy from Kay ( ), seemingly random deeds connect Erling (Viking) raiders and Anglcyn (English) and Cyngael (Welsh) princes: If only Bern Thorkellson hadn't stolen that horse in a desperate act of vengeance against his sorry fate; if only Dai ab Owyn hadn't stepped outside the safety of Brynfell right at the moment when the Erlings attacked; if only Ivarr Ragnarson hadn't been born ill-formed and downright cruel; if only Aeldred hadn't been king of the Anglcyn; if only Thorkell Einarson had murdered only one man and not the second; if only Alun ab Owyn hadn't stepped into that pool on a moonless night and seen the Queen of the Elves in procession. At first glance, each individual's act appears to be a normal human response. It's only later, as the characters' paths cross, that the pieces come together to weave a dazzling tapestry of conjoined fates. Solid research, filtered through vibrant prose, serves to convey a sense of how people really lived and died in Viking and Anglo-Saxon times and how they might have interacted with the realm of magic on a daily basis. Readers of lighter fantasy should be forewarned—the novel contains a lot of gruesome killing and the fairy world plays a relatively minor role, as do women.