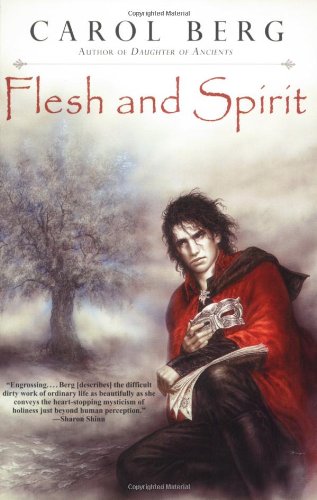 At the start of this chilling fantasy from Berg ( ), the first of a pair set in the land of Navronne, her rebellious hero, 27-year-old Valen, has been hiding from his pureblood family of sorcerers for 12 years. Valen, who's also struggling with a kind of drug addiction called "doulon sickness," possesses his grandfather's magical book, ("Legend said it could lead men to the realm of angels"). The book is Valen's passport to sanctuary with the learned monks of Gillarine Abbey, who believe he can unlock its magic. After his family discovers him, Valen becomes resolved to learn the book's power. At stake is not only the protection of an innocent boy sheltered at the abbey from greedy princes vying for control of their dead father's kingdom but also the entire world's salvation. Like much fantasy marketed as "adult" today, this well-written novel is suitable for readers as young as middle-schoolers, though some preteens may find it a bit too dark and slow for their tastes.