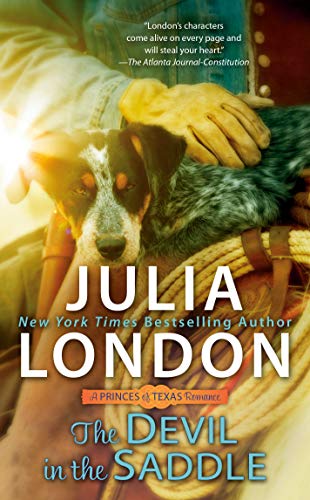 The Devil in the Saddle

Friends get more than just benefits in London’s second Princes of Texas contemporary (after The Charmer in Chaps), which tackles dynamics of class, wealth, and power while developing a gripping friends-to-lovers romance. The Prince family, owners of the Three Rivers Ranch in Texas, have fallen on hardish times after the death of patriarch Charlie, who gambled away much of their money, and they can barely afford to employ majordomo Martin Fontana. Hallie Prince, Charlie’s daughter, still lives like she’s rich, but that hasn’t stopped her from befriending Rafe Fontana, Martin’s oldest son. Rafe has been “quietly, privately, and desperately” in love with Hallie all his life, but he fears that acting inappropriately could cost his father his job. When Hallie catches her fiancé cheating, she turns to Rafe for support, and, as usual, he’s there for her. But when chemistry develops between them and she challenges him to admit how he feels, he holds back, knowing they can’t escape the difficulties that their professional relationship presents to their personal entanglement. London beautifully captures the essence of the couple’s friendship and the depth of their emotions, making the lovemaking that much more intense. Hallie’s grandma, Dolly, is just as charming and funny as ever, and the Prince family’s financial problems bring more comic relief than pathos. Readers will have a grand ol’ time revisiting Three Rivers. (Nov.)
close
Details

Before I Let Go
Before I Let Go
Kennedy Ryan
Ryan (Reel) brings both tears and laughter in a powerhouse second-chance romance that shines a sensitive light on mental health issues. Following a stillbirth, Yasmen Wade Continue reading »