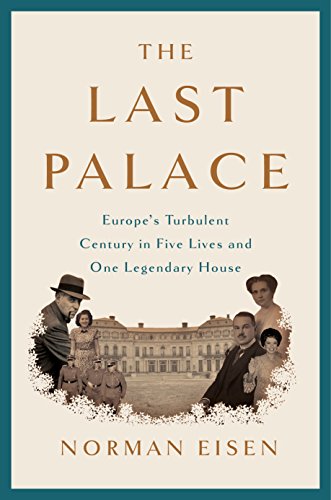 The Last Palace: Europe’s Turbulent Century in Five Lives and One Legendary House

In this engrossing tale by Eisen, former U.S. ambassador to the Czech Republic, the changes of 20th-century Europe are illuminated by the stories of one historic Prague building, some of its notable residents, and the author’s mother, a feisty Holocaust survivor. When Eisen, appointed to his post by President Obama, moved in 2011 into the palace of the title, now the U.S. ambassador’s residence, he was intrigued by a Nazi label on an antique table. What, he wondered, was the true story of the mansion, constructed between the world wars by Jewish coal magnate and banker Otto Petschek as an homage to European culture? Eisen’s nonagenarian mother, Frieda Grunfeld Eisen, wasn’t surprised by his finding; she survived Auschwitz, only to flee her Czech homeland as the Communists consolidated power after the war. Eisen interweaves Frieda’s story with those of Petschek and his family; Rudolf Toussaint, the conflicted German colonel who lived in the palace during the Nazi occupation; Lawrence Steinhardt, the U.S. ambassador who kept it out of Communist hands; and Shirley Temple Black, who, as ambassador beginning in the late 1980s, witnessed the end of communism. Together their stories illuminate the ebb and flow of totalitarianism, painting a picture both hopeful and disheartening. This action-packed yet lyrically written page-turner confers a fascinating human understanding of Europe’s past and present. Agent: Eric Simonoff, William Morris Endeavor. (Sept.)
close
Details