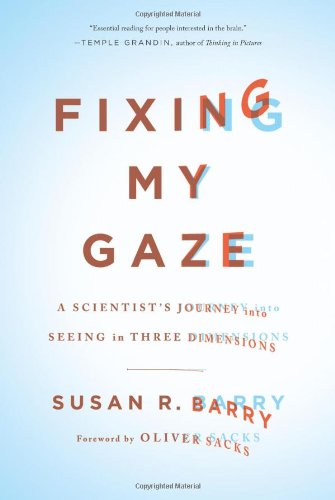 Fixing My Gaze: A Scientist's Journey into Seeing in Three Dimensions

Barry, a neuroscientist at Mount Holyoke College, was born with her eyes crossed and literally couldn't see in all three dimensions. Barry underwent several surgeries as a child, but it wasn't until she was in college that she realized she wasn't seeing in 3-D. The medical profession has believed that the visual center of the brain can't rewire itself after a critical cutoff point in a child's development, but in her 40s, with the help of optometric vision therapy, Barry showed that previously neglected neurons could be nudged back into action. The author tells a poignant story of her gradual discovery of the shapes in flowers in a vase, snowflakes falling, even the folds in coats hanging on a peg. After Barry's story was written up in the by Oliver Sacks, she heard from many others who had successfully learned to correct their vision as adults, challenging accepted wisdom about the plasticity of the brain. Recommended for all readers who cheer stories with a triumph over seemingly insuperable odds. Photos, illus.