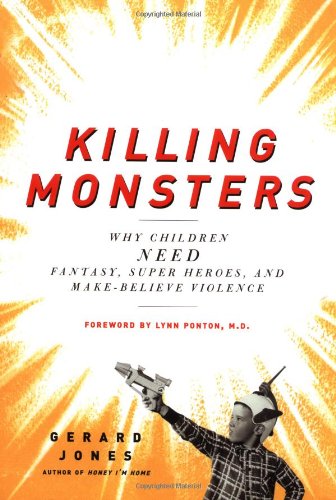 Violent entertainment is good for kids, and demonizing it can do great harm to their emotional development, claims Jones () in this provocative and groundbreaking work. Drawing on his experience as a parent and as a creator of children's cartoons, as well as interviews with dozens of psychologists and educators, Jones forcefully argues that violent video games, movies, music and comics provide a safe fantasy world within which children learn to become familiar with and control the frightening emotions of anger, violence and sexuality. He debunks studies linking violent media with violence in society and argues that children clearly understand the difference between pretend and reality. Providing realistic and helpful advice, Jones says parents need to learn to differentiate between what violent games mean to children and what they mean to adults, and to stop imposing their understanding of them on children. Adults may be horrified at the literal meaning of a video game, but children are far more interested in its emotional meaning; "through identifying with a fantasy figure who displays intense sexuality, wields destructive power, and exudes heroism, kids can help themselves feel more control over these forces." Jones speaks to adult fears of the power of popular culture and cautions that "entertainment has its greatest influence when it's speaking to something that isn't otherwise being addressed in a child's life." To lessen the impact, adults should "model nonaggression, empathy, respect, a clear distinction between fantasy and reality, and the integration of aggression and other scary feelings."